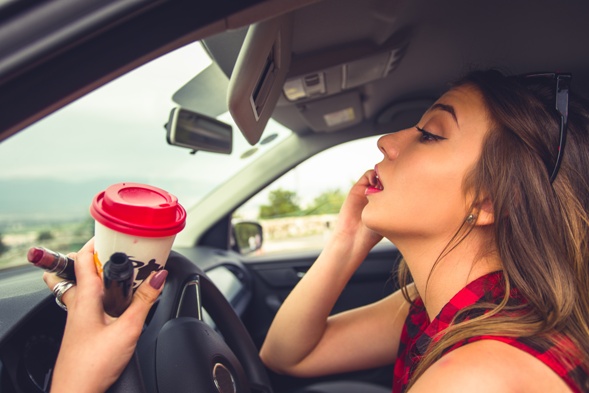 Distracted driving happens when someone tries to do something other than driving when they are behind the wheel. It can be anything from switching playlists on their smartphone to looking at a passenger in their car. When another driver’s distraction causes a wreck that leaves you injured, you can hold them responsible.

There are three primary types of distracted driving:

Distracted driving happens any time the driver isn’t focused on the singular task of driving.

If you were involved in a wreck that was not your fault, it is likely that distracted driving was at least a contributing factor, if not the main cause of the wreck. According to government data, distracted driving is a common occurrence. Consider these facts:

In West Virginia, it is illegal to use a hand-held device while operating a vehicle. If the driver who caused your wreck was breaking one of the following West Virginia laws, they can be held accountable for the losses you have suffered:

It might not be easy to prove that the driver who caused your wreck was illegally using a cellphone, but our team will work hard to hold them accountable.

Be Prepared to Prove That the Driver Was Distracted

If you are ever in a car wreck that you suspect was caused by a distracted driver, you need to immediately take note of everything you notice about the situation. If possible, consider taking these steps to record observations and gather evidence in a potential distracted driving case:

Proving that the driver was distracted can be a complex process, and an experienced car wreck attorney will be able to help you prove it in ways you haven’t yet considered. With modern technology, most drivers leave a trail of evidence.

You Can Afford a Car Wreck Attorney

Many people who are injured in a car wreck caused by another person’s negligence don’t realize that they can afford an attorney to help them file an injury claim, but an attorney truly is within anyone’s reach. That’s because personal injury attorneys take cases on a contingency basis. That means that you won’t be charged until or unless the attorney wins your case. At that point, they will take a percentage of your settlement to cover their fees. You will not have to pay any money upfront, so you don’t have to risk anything to have an attorney by your side who will fight for your rights.

If you are in a car wreck, the insurance company for the distracted driver will do everything they can to save money on the claim, including tricking you into saying something that absolves their driver. Only speak to an attorney who is looking out for your best interests to ensure that you will be fairly compensated for all the pain, suffering, and other injuries you endured because someone chose to drive while distracted.

If you have been hurt by a distracted driver, Bailess Law Firm is here to help. Contact us today. If you want to learn more about the services we offer, follow us on social media. We would love to get to know you and see how we can help you stand up for your rights. Nobody deserves to be hurt by a distracted driver, and you can hold them accountable for their actions.